Career change at 40. How to make it happen?

“If you do it, do it a hundred percent. If you are willing to learn something new, you will find a job quickly.”

Before signing up for the Winter Batch 2020 of Coding Bootcamp Praha, Kamil Drozd worked as a purchasing manager in an automotive company. The job was good but also rather repetitive and stressful and Kamil kept wondering whether this was what he wanted to do for the rest of his life. It was not an easy choice to make as Kamil decided to switch careers after 40 and with a family to take care of. Ultimately, he decided to follow his passion and go for a new career path. His goal was combining his coding hobby with a job where he could continuously learn. We interviewed Kamil six months after his graduation to learn more about the steps he took after leaving the bootcamp and how it went for him.

How would you describe your experience at the bootcamp?

One of my main goals for a career change was having the ability to always learn something new. I learned a lot, before, during, and also after the bootcamp and it is something that I am truly excited about. I especially enjoyed the Final Team Project stage because it is a good simulation of how the real job looks like. Each day in my new job I now cooperate with other developers on the same project. So it was great trying such cooperation already beforehand and learning many skills useful in development teams.

The bootcamp is a necessity to get to the first stage, which is getting a job after graduation. It helped me showcase that I was able to learn something new that I can put into practice.

You are now working at Inventi. Your batch has ended at times of the first Covid-19 wave. How difficult was it to find a job?

The bootcamp ended at the beginning of April and Inventi hired me at the end of May. Altogether at that point I had three job offers, so I cannot say that Covid-19 had any negative impact on my ability to find a job. I chose Inventi because I decided to be a PHP developer and the company seemed like a great place for learning and future growth. It proved to be true as I am already working on my second project! Soon I should get started on a third one. Each project had its unique challenges, they were all different and had something new to offer.

Do you think it is more difficult to find a job when you are over 40?

I am 42 now. When I was deciding to switch careers, I was thinking like, I don’t know if it is the last chance to make such a huge decision. But I think that for me, 42, is also the age where I am able to learn something new, and maybe it was also the point for me to not work in a job that I don't want to, and I wanted to change it.

And I think that 42 is not an age, which should prevent you from making this switch.

Also, I am in touch with my past colleagues, and the automotive industry is now slowing down. For example, the company where I worked in the past made stamped parts of cars. And, Skoda works on 60, 75% of last year. They are in trouble; not Skoda, but their suppliers have problems now. So yeah, I am really glad that I’m out of my past job!

How big is your team at work and how do you get help, when needed?

In the first project, there were back-end and front-end sides, so there were about six developers. The second project has been running, I think, for five years, and the client wants to slowly improve it, so we are now three developers on this project and each month, we have a new version to deploy.

I’m really happy about the support I get from the senior developers.  If I am struggling, they always give me notes on what I have to focus on to solve it. Once it happened that I was not able to move forward at all, so they showed me step by step how it worked. It’s a big advantage when you have someone you can ask and it helps me to learn faster.

Basically, I'm trying every day to start at the same time, at eight o’clock from home. In the office, let's say half past eight, and everyday, eight hours to work on a project. But, it is also possible for example, one day, to work only four hours and the next day more as it's more about completing my tasks. There are some specific times for completing the tasks. So, it's up to me to manage my time at work, but for me, it is better to do it at one time and not to cut it in too many small pieces. 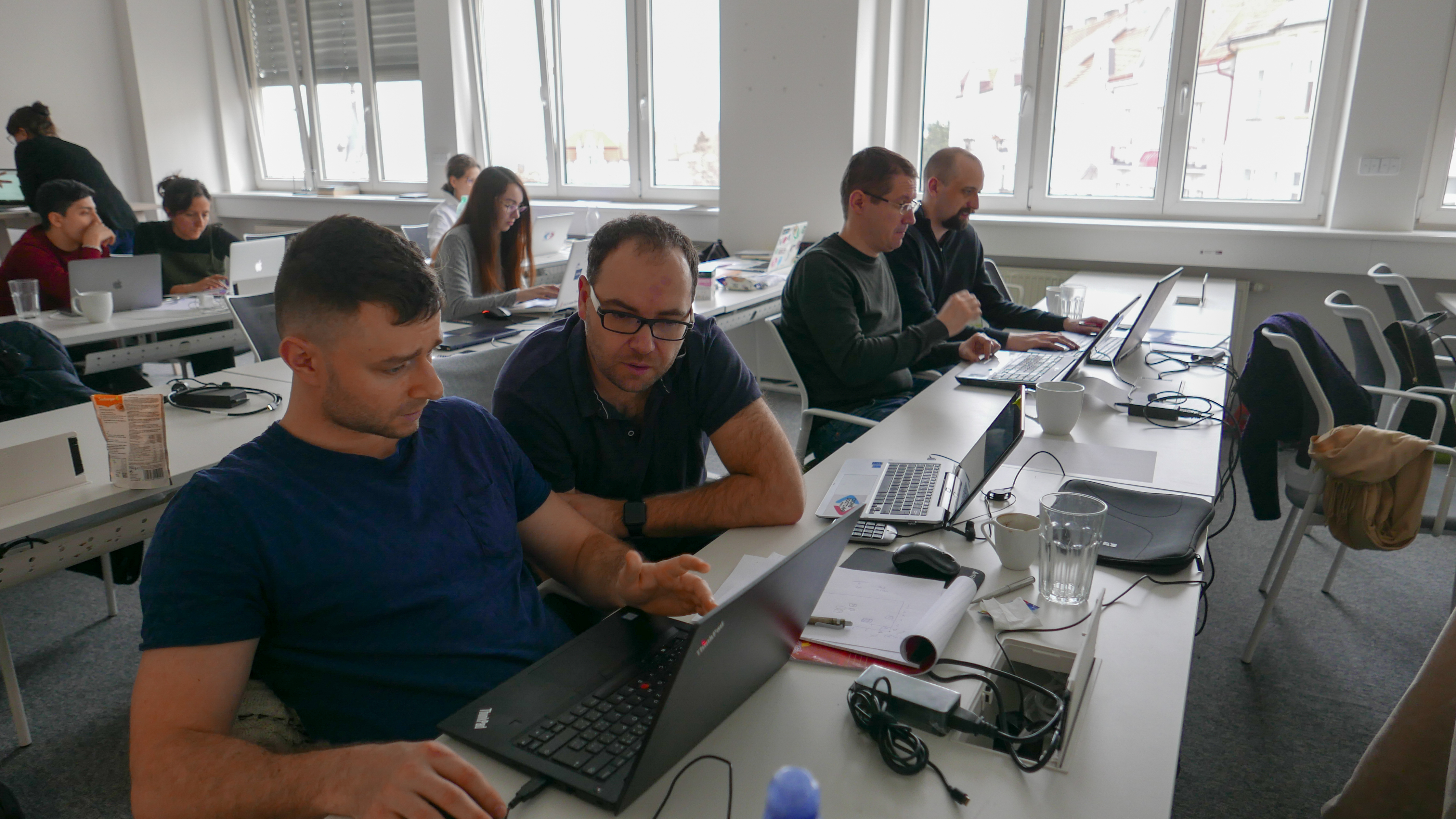 Kamil during his second hackathon

Are you coding a hundred percent of the time, or doing other tasks?

It's only coding, but because some tasks are for me really new, for example, the tasks with elastic search, the first thing in this case is to analyze the code that is in the project, to read or learn something new from the documentation. And, in this way, I am still learning something new, which is great.

How have you combined studying, working, and taking care of your family?

Before signing up for the bootcamp I discussed everything with my family to make sure it runs smoothly. I have two children, 11 and 7 years old, and sometimes it was hard for them to understand that they needed to let me study! For me it’s a great advantage to be able to work from home most of the time because in this way I can manage my time much better. But from time to time I feel the need for other-than-my-family-members social contact, so I stop by at the office :)

What would you advise to anyone thinking about a coding bootcamp?

If you do it, do it a hundred percent. Don’t give up just because you are struggling for three four days. Once you find a way to move forward, tell yourself “Hey, I have done this”. And if you have not yet found the way to move forward, then just take my word for it because me and many other students know now that it’s all possible and achievable.

If you are willing to learn something new, you will find a job quickly.

Because, I can say that every week, at least one headhunter contacts me through LinkedIn, sends me some job offers, and wants to meet me. I’m really happy at my company but it’s still a really nice feeling to see that my skills are in such demand!

How to finish a bootcamp and find a job, all remotely

Why mentoring is a good way to keep learning

We use cookies to give you the best online experience. Please let us know if you agree to all of these cookies.